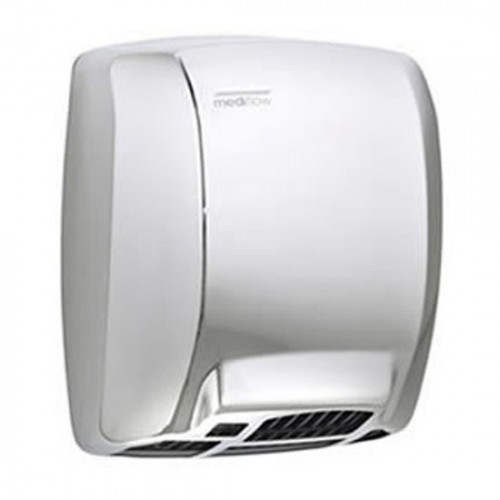 A 2012 Mayo Clinic study conducted by University of Queensland researchers found that bacteria are more likely to spread from wet skin than dry. So, drying off is certainly important. When it comes to getting rid of those germs, and thus protecting your office or school, are paper hand towels or hot air dryers more effective?

To determine their findings, the scholars studied the factors of speed of drying, effectiveness of drying, effective removal of bacteria and the prevention of cross-contamination. The question of paper versus air is not a new one, so the analysis consisted of looking at 12 independent studies that have compared hot air hand dryers, paper towels and cloth towels.

And The Winner Is

The study determined that towels made of paper were the hands-down winner. Paper was quicker at drying hands, was more effective in removing bacteria from washed hands, and was better at preventing the spread of bacteria within the washroom.

The study recommends having paper hand towels in settings where the spread of infection is most critical, such as schools, hospitals and offices. Also, the report says those washing their hands while in public settings prefer using paper. It notes that hand hygiene adherence would possibly decrease if paper towels are not available. It appears that whatever paper towel brands you choose to offer, the important factor is having the paper kind available.

The Mayo Clinic study suggested that paper towels dry hands efficiently, remove bacteria effectively, and cause less contamination of the washroom environment than an air dryer. Microbiological testing of towels after they had been used found that the bacteria were transferred from hands onto the towels, helped by the friction of rubbing the hands and towel together. The report said that from a hygiene standpoint, paper products are superior to electric dryers, and it recommended that paper be used where sanitation is paramount, such as in hospitals.

Say No To Hot Air

Researchers measured the effectiveness of bacteria removal by swabbing fingers and palms. They found that paper products actually reduced the amount of bacteria, whereas air dryers were the least effective. The study reported that dryers are not only noisy, but they also irritate the skin. Also, people often tend to skip the dryer and instead shake their hands to dry them. Shaking does not reduce bacteria, the report found.

Another more dangerous component is the possibility of spreading bacteria in the air.  Every time a toilet is flushed, a fine mist of fecal bacteria may be sprayed into the air. Air movement, such as that found in a hot air dryer, may disperse that mist onto hands, hair and clothes.  Testing showed the airborne bacteria can spread up to 3 feet around the electric dryer. The study said no bacteria were spread with paper or cloth towels.

Many of the reviewed studies reported that because air dryers are slow, people tend to spend only about 22 seconds drying, while 41 percent wiped their hands on their clothes instead. Using just the air dryer took about 45 seconds to reduce wetness to 3 percent. With a paper towel, it was only 10 seconds to make hands that dry.

Also, people said they preferred having a single-use, disposable towel to dry their hands. The study concludes, The provision of paper towels should be considered as a means of improving hand hygiene adherence.

To keep the office cleaner and employees happier, using paper products in the washrooms is key. There are a variety of paper towel brands and styles available, all of which are equally effective in keeping germs at bay. There are large rolls that can be dispensed by pulling through the middle of the roll, through a roller device or through an automatic feeder. There are also folded towels which are dispensed one at a time, either by pulling or ejecting automatically. For environmentally-conscious customers, there are recycled supplies available in different styles as well.

When purchasing products for large or small facilities, it is most cost effective to buy paper towels in bulk. Prices typically go down per unit ordered, so if you have a bit of storeroom space available, it makes sense to order several at once. A large reserve also helps when you are keeping multiple areas supplied. Youll also cut down on any shipping or delivery charges.

Buying bulk toilet paper is a cheaper and much more convenient route than purchasing small packages, too, whether you buy regular-sized rolls or the jumbo-sized spools. Depending on your office budget, you can purchase the washroom staple in 1-ply, 2-ply or 3-ply rolls. There are also individual sheet dispensers so people dont have to spend time clawing to find the start of the roll.

Commercial-size rolls typically fit large dispensers which can hold at least two per unit. Though the apparatus takes up a bit more space than a single roll holder, it offers more convenience because it doesnt need to be restocked as often. Restaurants, government buildings and corporate offices can see health and cost benefits by purchasing both paper towels in bulk as well as supplying all the washrooms with bulk toilet paper.

Research shows that using paper towels is the most hygienically sound option when it comes to drying hands in public places. In addition, a majority of people say they prefer using paper products over hot-air hand dryers in the washroom, regardless of the style of the towels, so they are more likely to use them. By providing your employees, and the public who frequent your business, with paper hand towels, you can keep your facility a cleaner and healthier place.